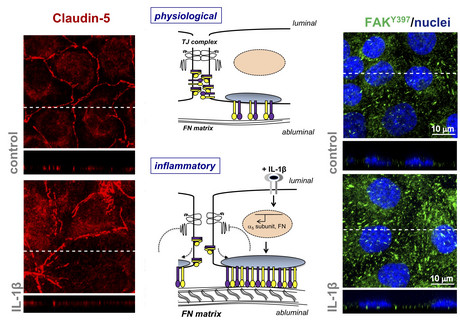 Overall, we are interested in adhesion processes that are involved in the initiation and the controlled resolution of inflammatory responses. Characterization of these processes allows the targeted development of anti-inflammatory compounds and drug carrier systems for the efficient pharmacological intervention of excessive inflammatory disorders.
For these investigations, in vitro models for neuroinflammation, psoriasis and periodontitis are used.

1. Development of inflammatory 2D- and 3D-models of skin, oral mucosa and the blood brain barrier.

To investigate inflammatory responses at the cellular and molecular level, suitable model systems have to be established. In line with the 3R concept (replace, reduce, refine), we try to avoid animal studies by using human in vitro models, instead, which mimic the in vivo situation as exactly as possible. For this purpose, we use 2D but also more complex organotypic 3D cell culture systems, which additionally take the physical interactions between different cells of a tissue into account.

2. The role of tight junctions in inflammation.

In the oral mucosa, tight junctions are not well characterized. Currently, we are studying the expression, localization and function of tight junction proteins ZO-1, Claudin-1 and occludin under physiological and inflamed conditions in the gingiva.

3. Glycosidated phospholipids for the potential application in psoriasis, periodontitis und for the treatment of breast cancer.

Using a microarray-based gene expression technology, we could demonstrate that, in addition to these direct effects on signaling molecules, Ino-C2-PAF alters the expression of various genes. Particularly, we found that Ino-C2-PAF represses the expression of a group of targets implicated in inflammation and innate immune responses (Semini et al, 2011b; Semini et al, 2014). The inhibitory effect on inflammatory processes could be confirmed in vivo in two complementary mouse models of psoriasis. Here, Ino-C2-PAF led to significant alleviation of the clinical symptoms and normalized the pathological cutaneous changes including vascularization (Forkel et al, 2014).

4. Development of nanocarrier-based drug-carrier systems for the topical treatment of inflammatory disorders of the oral mucosa.

The oral mucosal surfaces are covered by a functional epithelium, which is ortho-, para- or non-keratinized. The oral epithelium has a crucial barrier function as it protects the host from microbial, mechanical and other environmental influences. This is obtained by a rigid physical barrier, mainly formed by tight intercellular junctions and a chemical barrier that consists of secreted antimicrobial peptides that directly affects oral microorganisms and possess mediator-like functions.

Additionally, the saliva and the crevicular fluid contribute to the barrier function that helps to maintain a healthy epithelial homeostasis.

Pharmacological targeting of the oral mucosa is challenging because applied drug formulations are constantly flushed by both fluids. Therefore, mucosal adhesion and efficient drug release at the compromised mucosa are important features of effective delivery systems.

In an interdisciplinary approach with chemists of the Free University Berlin and the periodontology department of the Charité, we study novel nanocarriers and nanogels specifically designed for the topical treatment of inflammatory disorders of the oral mucosa (Jager et al, 2018).