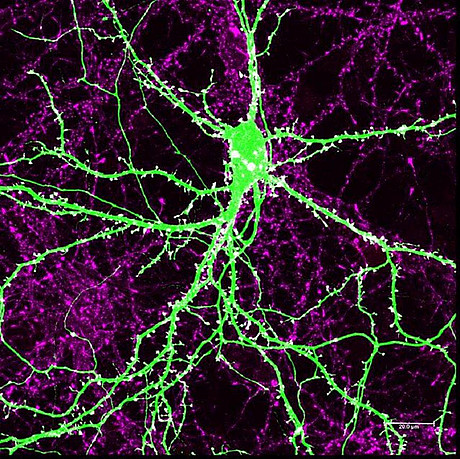 Regulation of the PTEN tumour suppressor in neurons

PTEN (phosphatase and tensin homologue deleted on chromosome 10) is a tumour suppressor that can inhibit proliferation and migration as well as control cell growth and apoptosis in a number of different cells. PTEN functions predominately through its lipid phosphatase activity, converting phosphatidylinositol 3,4,5-trisphosphate (PIP3) to phosphatidylinositol 4,5-bisphosphate, thereby directly antagonizing the activity of PI3K and its established downstream signalling pathways such as those involved in regulating the cytoskeleton and the translational machinery. PTEN is highly expressed in post-mitotic neurons and recent work indicates that de-regulation of PTEN affects important neuronal functions in the brain, which have been attributed to its role in controlling neuronal growth, synaptogenesis and synaptic plasticity. WE set out identifying the determining cellular machinery controlling PTEN functions in neurons through proteomics approaches. Our work identified a requirement for functional actin-based motor proteins in the control of PI3K signalling, a mechansim involing a previously unknown association between PTEN and class V Myosins. We demonstrate that inactivation of MyosinV-transport function in CNS neurons induced - in line with known attributes of PTEN-loss - enlarged neuronal soma size and increased PI3K and mTor signalling. Our data characterise a novel myosin-based transport mechanism that regulates the function of the PTEN tumour suppressor and PI3K signalling (van Diepen et al., 2009).

Functional analyses of the actin regulator Drebrin in the nervous system

The actin-binding protein Drebrin is involved in the regulation of actin filament organization, especially during the formation of neurites and cell protrusion of motile cells. Drebrin is also enriched in dendritic spines, where it controls spine morphology and is part of the large postsynaptic protein complex regulating synaptic transmission. Progressive loss of Drebrin has been linked to Mild Cognitive Impairment, a transitional state between healthy aging and mild dementia. Major loss of Drebrin in dendritic spines is characteristically found in patients with Alzheimer's disease and Down's syndrome. Thus, Drebrin is a salient candidate protein involved in transducing transient synaptic dysfunction into irreversible spine degeneration and progressive cognitive deficits. However, the specific mode according to which DBN is regulated remains largely unknown.

We have recently characterized the interaction of the PTEN tumor suppressor with DBN: PTEN binds DBN and negatively regulates DBN phosphorylation at S647 (Kreis et al., 2013). Our results identify a novel mechanism by which PTEN is required to maintain DBN phosphorylation at dynamic range. To study the precise role of Drebrin and the significance of Drebrin phosphorylation in vivo, we have recently established conditional knockout mouse lines and ongoing characterisation confirms Drebrin loss (Drebrin A and Drebrin E) in dependence of Cre. We also developed a rapid and reversible system to express exogenous Drebrin variants at physiological levels. These "knock-out / rescue" approaches will help us to gain comprehensive insight into the regulation of neuronal Drebrin, in particular, during synaptic plasticity and neurological disease.

Important shape-shifters in the brain: morphological changes of astrocytes during development and in brain trauma

Astrocytes are the most prevalent glial cells in the brain. In the past, they have long been considered as 'mere supporters' of neurons. However, new research results show that astrocytes are actively involved in a variety of functions in the CNS, including synaptogenesis, neural transmission and synaptic plasticity. During disease and injury, astrocytes efficiently protect neurons, for instance by sealing them off from neurotoxic factors and by repairing the brain-blood-barrier. Their finely branched morphologies, which far exceeds the complexity of neurons, allow astrocytes to interact with specialized cellular structures such as synapses, blood vessels and other glial cells. With a number of different experimental approaches, we study the cytoskeleton of astrocytes in vitro and in vivo to examine the importance and molecular basis of their ability to alter their shape during postnatal brain development and traumatic brain injuries.

Synaptic transmission is closely linked to the morphology of dendritic spines, which are protrusions on the neuronal surface that receive most of the excitatory input. Rather than being stable structures, spines are dynamic and coninuously undergo shape changes. Such changes in morphology are directly influenced by synaptic activity, intracellular ion concentrations and by external factors, and can have major impact on synapse function including synaptic efficacy. Spine shape is controlled by changes in the cytoskeleton which mainly consists of actin filaments. During spine morphogenesis, PI3K signalling has been shown to greatly affect normal spine shape. For example, activation of PI3K signalling causes increases in filopodia spine length, and, conversely, inhibition of this signalling pathway by overexpression of PTEN reduces both dendritic spine number and filopodia. The downstream signalling effectors of PIK activity controlling dendrititc spine morphogenesis are largely unknown. We identified an actin binding protein highly enriched in dendritic spines as novel PTEN interacvtor. We are cvurrently testing if this protein-protein interaction may impinge on regulating actin dynamics and , together, may determine the shape and dynamic behaviour of dendritic protrusions.

Akt is a threonine/serine kinase downstream of PI3K signaling, and critical for regulation of cell growth, survival, proliferation and differentiation. Deregulation of Akt activity due to aberrant PI3K signaling has been linked to the progression of various pathological conditions including cancer and neurodevelopmental disorders. There are three isoforms encoded by three genes: Akt1, Akt2 and Akt3. An exact role of these isoforms in Akt signaling has not been completely established. Akt has three main phosphorylation sites, two activating ones at S473 and T308 (numbered according to Akt1) and a constitutive, stabilizing phosphorylation at T450. Western blot analyses of the different phosphorylation sites using phospho-specific antibodies is limited due to the lack of isoform specificity of antibodies. Most widely used techniques also suffer from limitations in their requirement for a large sample size. We use isoelectric focusing (IEF) to investigate isoform-specific phosphorylation states by differences in their isoelectric point (pI). Analysis of isoforms and individual phosphorylation states of native proteins by IEF occurs through separation in capillaries with rapid immobilization, allowing resolution and quantification using a single pan-specific antibody.

We established an assay for Akt to identify individual isoforms and their specific phosphorylation in growth factor (e.g. Insulin) stimulated or PI3K inhibitor treated cell lysates. This newly developed assay provides a basis to rapidly analyze cell lysates and tissues for their isoform-specific Akt phosphorylation and expression after stimuli or pathologic changes.