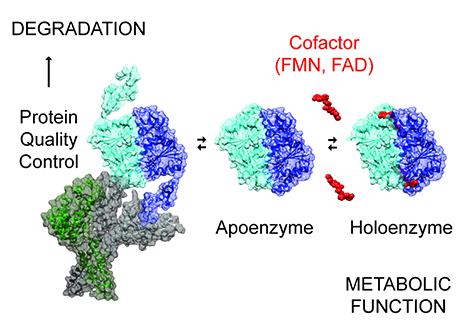 We discovered that the proteostasis-dedicated ubiquitin ligase CHIP docks on cellular membranes during acute stress. HSP70 and lipids compete for mutually exclusive binding to the TPR domain of CHIP. At new cellular locations, access to compartment-specific substrates enables CHIP to participate in the reorganization of the respective organelles, as exemplified by the fragmentation of the Golgi apparatus. Do other TPR domain-containing proteostasis proteins (HOP, DnaJC7, FKBP51, FKBP52) participate in similar regulatory loops? The organelle adaptation driven by CHIP and other cochaperones offers a mechanistic understanding of the diversification of the cellular stress response during adaptation and disease development.

RNA in the cell is almost always associated with proteins. An exception represents the polysome disassembly during stress when naked RNA is massively released into the cytosol. We identified the mRNA methylation machinery which enhances sequestration of transcripts in stress granules to protect them during stress. Unexpectedly, inhibition of the machinery affected clearance of an amyloidogenic protein and increased bystander protein and RNA coaggregation. Our results reveal a link between protein and RNA homeostasis. Are N1-methyladenine reader proteins responsible for the mRNA sequestration during acute and chronic stress? Do similar mechanisms operate during RNA virus infection in human cells?

Riboflavin (vitamin B2) is the precursor of FMN and FAD cofactors, which define a small, but metabolically highly important flavoproteome encoded by ca. 100 genes in humans. Using quantitative mass spectrometry and biochemical assays, we uncovered the destabilization of a significant fraction of flavoproteins during vitamin B2 deficiency. The destabilization resulted in increased protein aggregation. Our data suggest that relative insufficiency of apoprotein degradation caused by vitamin shortage can aggravate protein aggregation disorders. Stability analysis of flavoproteins, such as NADPH oxidases, NO synthases or respiratory chain complexes, bears the exciting possibility to connect nutrition and gut microbiome with chronic diseases, inflammation and aging-related conditions. From the other side, we are investigating the possibility to use local and transient shortage of vitamin B2 to increase vulnerability of tumor cells for chemotherapy.